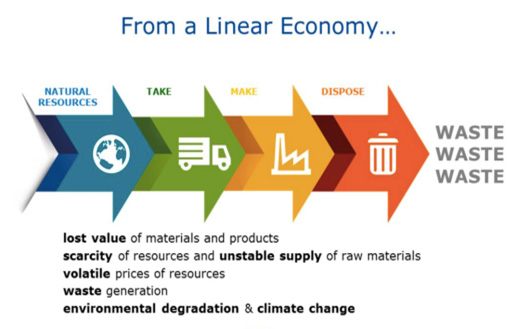 The industrial revolution brought us linear production and consumerism. Consumerism gave us an excuse to take, make, waste, and repeat. Now, the world faces a waste generation crisis that is only going to get exponentially worse if the behaviors and lifestyles of organizations and individuals do not change. At Clean Conduit, we believe the Circular Economy framework is the key to holding the largest waste contributors responsible for their actions in order to build a greener world for future generations.

Each day, roughly 0.74 kilograms of waste is produced per person globally. With a number that comprehensible, global waste generation may not seem like an issue that would top the charts on the greatest challenges faced by the world today. However, when that small 0.74 kilograms is multiplied by the 7.9 billion people living on Earth and then even further multiplied by the 365 days in a year, global waste generation amounts to about 2 billion tonnes of waste produced each year. Simply put, waste production is a global catastrophe.

Since the industrial revolution, modern society has largely embraced the concept of linear production. We take the Earth’s natural resources to make something that will satisfy consumer demand and then throw it away after minimal use. It is a take-make-waste way of life, and it is detrimental to the future of the planet. Without a long-term solution, the World Bank estimates global waste will increase by 70% as of 2050.